What is a Chromebook?

Tags
x360 x2 touch screen laptops student laptops laptops hp chromebook detachable laptops convertible laptops budget laptops 2 in 1 laptops
The digital age has become the technologically-advanced reality Baby Boomers merely dreamed of. From self-driving cars to internet connections that don’t require dreaded dial-up screeching, modernity has introduced us to cutting-edge tech that has changed the way we think, communicate, and go about our daily lives.
We can thank Google for changing the landscape of the internet, and since trying its hand at computer manufacturing, it continues to shape how we think of laptop computers.
Google first introduced the Chromebook to the market in 2011. In the years since their inception, Chromebooks have successfully expanded the portable computer market and benefitted consumers across a number of industries.
It is projected that by 2023, 17 million Chromebook units will have been sold worldwide. So what’s all the hype about? What is a Chromebook, what makes it special, and how is it different from a standard laptop? We’ll give you the rundown on everything you need to know about the Google Chromebook.

Think of a Chromebook as your one-size-fits-all computer for internet-dependent usage. Chromebooks are often referred to as cloudbooks because they remotely store files on Google’s virtual servers. This means that very little is stored locally on your PC.
Chromebooks are optimized for PC users who depend on Google for anything and everything from email to editing documents to spreadsheet creation. Engineered to utilize online web applications and cloud storage rather than programs and hard drive storage, Chromebooks are the lightweight answer for cloud-driven PC users.
Unlike typical PCs, Chromebooks are a different breed of laptop computer. Instead of running Windows 10 or macOS, Google engineered its own operating system, Chrome OS, based on Linux Kernel.
Major tech manufacturers like HP, Acer, Dell, and Lenovo offer their own versions of Chromebooks, effectively allowing brand loyal consumers to get in on the Chromebook wave. These laptops are the minimalist dream for Google and PC users worldwide.

What is the difference between a Chromebook and a laptop?

One of the most common confusions about Chromebooks is whether they are similar to a standard laptop. By appearance alone, it is fair to assume that the two are one and the same, but once powered on, the differences begin to show themselves. The same way distinguishing a Windows computer from an Apple computer is almost immediate, Chromebooks are easily contrastable from the majority of computers on the market.
It’s these very differences that excite PC users. What started out as a simple search engine has flourished into a multi-media conglomerate that offers a number of online applications from email service to web mapping.
As the global frontrunner for cloud computing innovation and invention, Google Chromebooks dished out a fresh dose of creativity and modernity to an otherwise homogeneous laptop market. So, what is it that makes the Chromebook so different from a standard laptop?

The most apparent distinction between Chromebooks and standard laptops is the built-in operating system. Although Chrome OS takes on similar visual design as Windows 10, the two are completely different in function.
A search button lives at the bottom left corner of the Chromebook, similar to the Windows start menu. Integrated taskbar shortcuts include the Chrome browser, Gmail, Google Docs, Google Drive, and YouTube, which all sit along the bottom of the laptop screen in what’s called the shelf.
Like a Windows taskbar or macOS menu bar, the Google shelf is fully customizable and can be placed at the bottom, left, or right of the screen. All applications are made easily accessible through the app launcher, effectively serving the same functionality as a Windows 10 start menu.
Chrome OS feels lighter and far more responsive than its Windows counterpart. However, its cloud dependence leaves little room for downloading applications outside of the Google Play store.
Chrome OS caters to web users who rely on Google for much of their online computing. Although it diverges profoundly from both Mac and Windows operating systems, users of either brand will have no trouble transitioning to the simplistic user interface Chromebooks offer.

Rethink what you know about computers. Google has made it possible for a laptop to run with a limited integrated hard drive.
The hard drive of a computer is the fixed machinery responsible for data storage. All documents, pictures, music, programs, files, applications, and the operating system live in the hard drive. Most general-use computers come with 256GB or more of hard drive storage space. In place of the hard disk drive, Chromebooks use a small solid-state drive.
This SSD is responsible for storing the operating system, which begs the question of where all other files and applications are stored. Most Chromebooks come with 16GB or 32GB of SSD space, but Google has modified local storage to function as a cache. 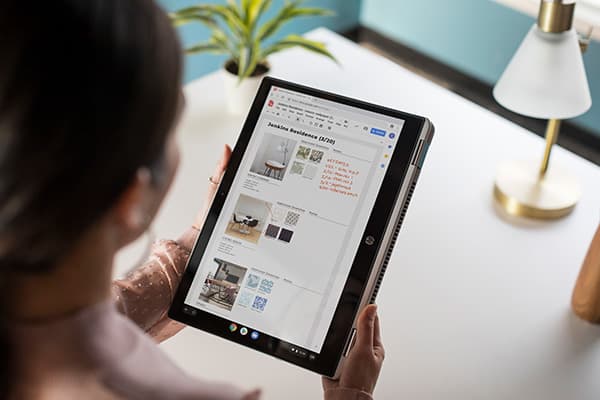 The Chromebook’s cloud dependency allows it to store all saved work and applications on cloud-based storage. The lack of hard drive space also allows manufacturers to offer budget-friendly prices without expensive hardware features to raise costs.

How much are Chromebooks?

Unlike Apple computers and Windows 10 PCs, the price range for Chromebooks is generally pretty narrow.
Chromebooks tend to trend in budget computer categories carrying price tags within the $100 to $500 range. This wide spectrum accounts for low-end and high-end laptop builds.
For example, the HP Chromebook x360 runs in the middle of the price range pack and comes equipped with an Intel® HD Graphics 500 card and an 11.6-inch diagonal HD IPS Corning® Gorilla® Glass NBT™ WLED-backlit touch screen. 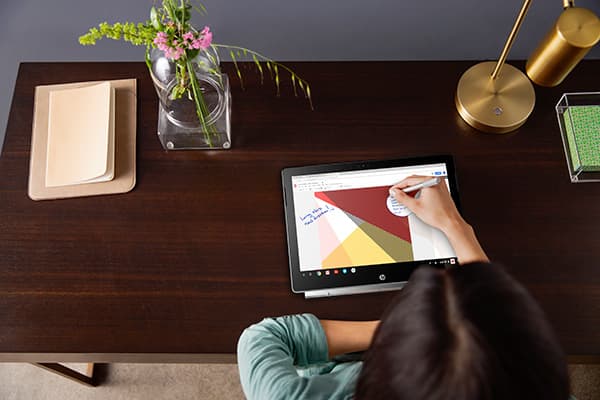 Depending on what you’re looking for in a computer, the price of a Chromebook can vary with your desired features. The fancier the specs, the higher the price tag.

What are the pros and cons of Chromebooks?

There are pros and cons of Chromebooks, just as there is with any piece of technology, so it's worth noting these before taking one home and calling it yours.
Chromebooks make good on their promise of low maintenance computing with high-quality operation, there are a number of characteristics that truly set them apart from the norm.
These features may be the make or break details that influence your final decision.

Since everything in a Chromebook runs off of the integrated solid state drive, it is able to offer fast and responsive performances from boot up. Chromebooks leave lengthy load times behind and boost efficiency with an impressive eight second boot time.
Since most computing activity is logged on Google’s virtual servers, CPU speeds are never bogged down by full storage capacities. These dependable laptops can handle as many tabs as you need without worry of crashing and burning.

PC users looking for a cost-effective alternative to a Windows or Apple laptop will find exactly what they're looking for in a Chromebook. There is no beating the consistently low prices that Chromebooks come with.
The vast majority of them are priced under $1000, and there are many under $500. As previously mentioned, Chromebooks cost significantly less than the average laptop because they don’t have the same built-in hardware that could drive prices up.

Comparable to how Apple computers allow syncing across their many mobile devices and programs, Google offers the same sync compatibility. By simply logging in to your Google account, your saved contacts, passwords, bookmarks, and multimedia libraries become readily available on the Chromebook.

All new Chromebooks come with 100 free gigabytes of Google Drive cloud storage for two years. When two years pass, the same plan is available for an affordable $1.99 per month. Not only is this an immense amount of space, but it comes at an incredibly low price compared to cloud storage competitors like Dropbox and Microsoft OneDrive.

PC users looking for a lightweight option will appreciate the consistently light build that Chromebooks generally come with. On average, Chromebooks weigh under three lbs.

All Chromebooks manufactured after 2017 feature Android-friendly compatibility when it comes to running apps. The overall functionality of Chromebooks was exponentially enhanced with this Android merge, and is one of the most talked-about perks that no other OS offers.
This means any Adobe or Microsoft apps created for Android are available for installation on new Chromebooks.

Chrome OS laptops come well-prepared for fighting malware with built-in virus protection software. Chromebooks were engineered with security in mind, and with everything floating in the cloud, security is of the utmost importance.
Chrome OS is as close to a virus-proof operating system as there is on the market, and with the tech whizzes at Google working to better performance and security for market-leading products, consumers can rest assured knowing their Chromebooks are as safe and secure as Google deems fit.

The Chromebook is one of the first laptops to venture into computer manufacturing without including a substantial hard drive. Without the storage on a hard drive, the Chromebook becomes dependent on cloud storage and the integrated 16GB or 32GB solid-state drive (SSD).
Since Chromebooks are not engineered for local storage, the SSD is mostly responsible for storing the Chrome OS operating system. Chrome OS treats the remaining SSD storage space as a cache, this means old downloads could be deleted to make room for new ones over time.

While it seems that integrated CD/DVD optical drives are quickly becoming a thing of the past, Chromebooks eliminate them altogether. Fortunately, Chromebooks are easily configurable to external CD/DVD drives if needed.

Unfortunately, it is not possible to simply connect a printer to a Chromebook and expect it to start printing. Unlike Windows and Mac, the Chrome OS is not capable of downloading and installing printer drivers.
Pn the plus side, printers with cloud-ready or internet connection capability will be able to connect and print anything from a Chromebook.

Since Chromebooks are so heavily reliant on internet connection, offline use becomes complicated when you’re unable to connect to a network.
Available offline tasks include:

When it comes to compatibility, there is no superior OS than Windows 10. As the most widely-used operating system around the globe, most programs and external devices are engineered with Windows compatibility in mind.
Fortunately for Chrome OS, Google has begun a program dubbed "Compatible with Chromebook" for compatible devices and programs. Google Play Store continues to grow and offer some pretty innovative content, but this limitation of a Chromebook remains one of the most glaring setbacks.
Make sure to explore which accessories and programs are compatible before you buy a Chromebook. The changing landscape is making even this limitation less and less of an issue with each new iteration of the Chome OS.

Chromebooks are the perfect computing solution for light, novice, or Google dependent PC users. Instead of being bogged down by typical computer hardware, the Google Chromebook paves its own lane in the laptop market.
Taking on well-loved features Mac and Windows users value most, the Chromebook is the futuristic innovation the digital age never knew it needed.
About the Author: Tulie Finley-Moise is a contributing writer for HP® Tech Takes. Tulie is a digital content creation specialist based in San Diego, California with a passion for the latest tech and digital media news.
Article reposted with permission from HP Tech Takes
← Previous Next →
Categories
Recent Posts